the meaningless ban on marijuana

Strange how society has on one hand categorised as dangerous and criminal innocent people who smoke or imbibe a harmless weed like cannabis, while on the other hand much higher proportion of the populace are addicted to alcohol socially or physiologically which is certainly a much more dangerous intoxicant harmful to the user, family and society just because the liquor industry is very rich with strong lobbies.

Dr Nutt who was part of a joint research team of three which published the above, in his blog in 2011 wrote "Taken together we estimate that alcohol is at least twice as harmful to users than cannabis and 5 times more harmful to society. The obvious conclusion is that the current legislation criminalising cannabis users is illogical as well as inhumane and may be causing much more harm than it does good". This shows that on the harmful index, marijuana at around 26 was far below alcohol's 72.

The different types intoxicants have been broadly categorised into opiates, cannabis, barbiturates, alcohol, amphetamine. Very broadly speaking, if we were to rank them on a spectrum very bad for self, family and society - alcohol emerges as the worst, followed by heroin of the opiate family, and some other derivatives of the same family, followed by barbiturates, amphetamine. Cannabis is at the bottom as the least harmful intoxicant. 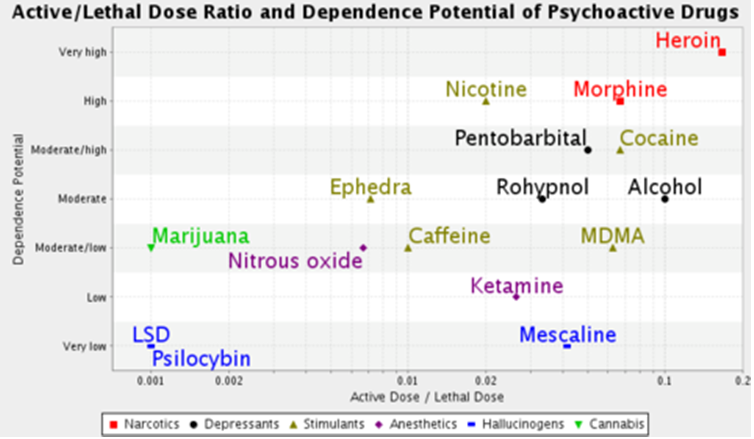 If we analyse through a quadrant analysis, as shown below...cannabis is in the spiritual / good quadrant

More recently, in Johann Hari's book 'Chasing the Scream: the first and last days of the war on drugs' a best seller on New York Times it is revealed how marijuana was in the first place was banned in US way back in the 1930s after alcohol prohibition failed. Hari's blog 'Why Is Marijuana Banned? The Real Reasons Are Worse Than You Think' explains the ridiculous reasons behind the ban. Strange how in USA which is the bastion of the free world such an authoritarian diktat could emerge, be implemented and kind of arm twisted across the globe.

The latest edition of the Economist is a special issue on why marijuana should be legalised. Economist is THE HOLY GRAIL of intellectual journalism. Indeed this is the best heads up for the cause for legalising that marijuana could have received.

Since time immemorial ancient societies in India, South America, Africa, etc have been using cannabis, bhang, etc without any deleterious effect. During the 20th century, cannabis was banned after centuries of usage. So now the wheel has turned a full cycle. About 70 to 80% of US prisons are filled with people with drug crimes and misdemeanours of whom a majority are convicted for using or possessing a harmless weed cannabis. The US Govt has now realised that the cost of banning cannabis is far higher than the cost to society and individuals if cannabis was decriminalised and made available. Many are of the view that the cost of alcohol addiction to individuals, their families and society is very high, yet it's legally sold. Families have been driven to bankruptcy. Strange indeed is the underlying logic of laws of society.

If fact one can go a step further and argue that certain substances like peyote, hashish, dhatura have been used since time immemorial for spiritual purposes…. cosmic consciousness, self realisation, satori, nirvana…In fact in the east, especially India, millions of mystics, babas, gurus smoke a lot of ganja, opium, etc in their quest for spiritual realisation and also as a way of life. apart from them, millions of lower class and middle class people both in rural areas and cities have their daily dose of ganja, etc. None of them suffer from any abnormal behaviour in excess of what is found in other classes. in certain parts of eastern India, especially in Orissa, ganja, bhang and opium are freely taken in certain districts, towns. Even the old are administered opium regularly to help them cope with old age....

Fair amount of research has been carried out in this space. Some of the greatest intellectuals, artists, rock n roll and doctors who have espoused the mind expansion way of life to name a few which readily come to mind are: Dr Aldous Huxley, Dr Timothy Leary, Dr Allan Watts, Dr Allen Ginsberg, Tom Wolfe, John Lennon, Jerry Garcia, Bob Dylan, Bob Marley…. and the list goes on. The entire anti-establishment culture of the 60s was fueled by the sweet smoke of marijuana. The hippy and beat generation were the first to fight against the illegal ban of cannabis.

History is replete with cycles of banning and re-allowing various psychoactive substances. Banning has never been an effective method. Humankind like in the garden of eden always craves for the forbidden fruit. Prohibition has never succeeded in any society. Tobacco, opium, alcohol, cannabis...have been prohibited at various points of history and subsequently some of them have been legally made available. Strangely cannabis which is the least harmful is still illegal in most parts of the world. With climate change on the rampage, marijuana should be the green intoxicant option over the industrial alcohol.


But starting with US cannabis is staging a comeback. Presently it is legal in some form or the other in more than half the states in US. It is expected to be legalised across US within a decade. this will surely set in motion a global wave wherein most places in the world will have marijuana freely.

Bob Marley who was a rastafarian devoted his life to the spread of one love and free marijuana smoking. Am 64. Waiting for the day within my lifetime when the ban on cannabis will be lifted. More importantly the conditioning of society must change which views cannabis in a poor light whereas alcohol is socially acceptable inspite of all its negatives.


The best part is that cannabis is the middle of the road psychoactive substance choice in terms of physical and psychological addiction, makes people peace loving, increases creativity, cost, least harmful to health, high lethal dose level...indeed it is the dream substance which can emancipate humankind from the morass it finds itself in in terms of violence, terror, financial collapse, economic over leverage, hyper consumerism and competition, climate collapse, high energy intensive lifestyles….
at February 25, 2016

Covid has suddenly thrust the planet to the inflexion point. It is a final wake up call for humanity. Civilisation has been on a suicidal ...

Pradeep Das
New Grammar of Living (NGL) is a series of blogs covering a wide spectrum of subjects which began in 2010. These blogs were an expression of existential angst about the insane norms of modern society where all economies strove for mindless growth based upon high energy usage; and individuals, families and human groups were mired in conditioning based upon materialistic values resulting in mental illness, social violence. These led to ever increasing exploitation of the planet’s resources and environmental degradation post 1960s – peak of present civilisation.